It’s been a bit, hasn’t it? I’ve been doing a little painting and not much Blood Bowl playing, but that’s kind of how life goes sometime.

After missing painting for a couple weeks and then not really getting back into it regularly, I’ve finally managed to start pushing myself to get things done. I try to paint a weeknight or two, and it’s helped to get my butt in gear.

I’ve added the red base color to pretty much the whole Dwarf team I was working on. I’m working on the brown for belts, boots, and other items. Then it’s on to gold. Afterwards, I should have a not too shabby Dwarf team. I’m going to have to push myself to finish them off with shading and highlights. But as I said, I’m getting more determined to get this team done so I can move onto something else. That might be another Blood Bowl team…or another game which I haven’t talked about yet, but likely will at some point.

Here’s the colors I’ve been working through:

And a shot of the team so far: 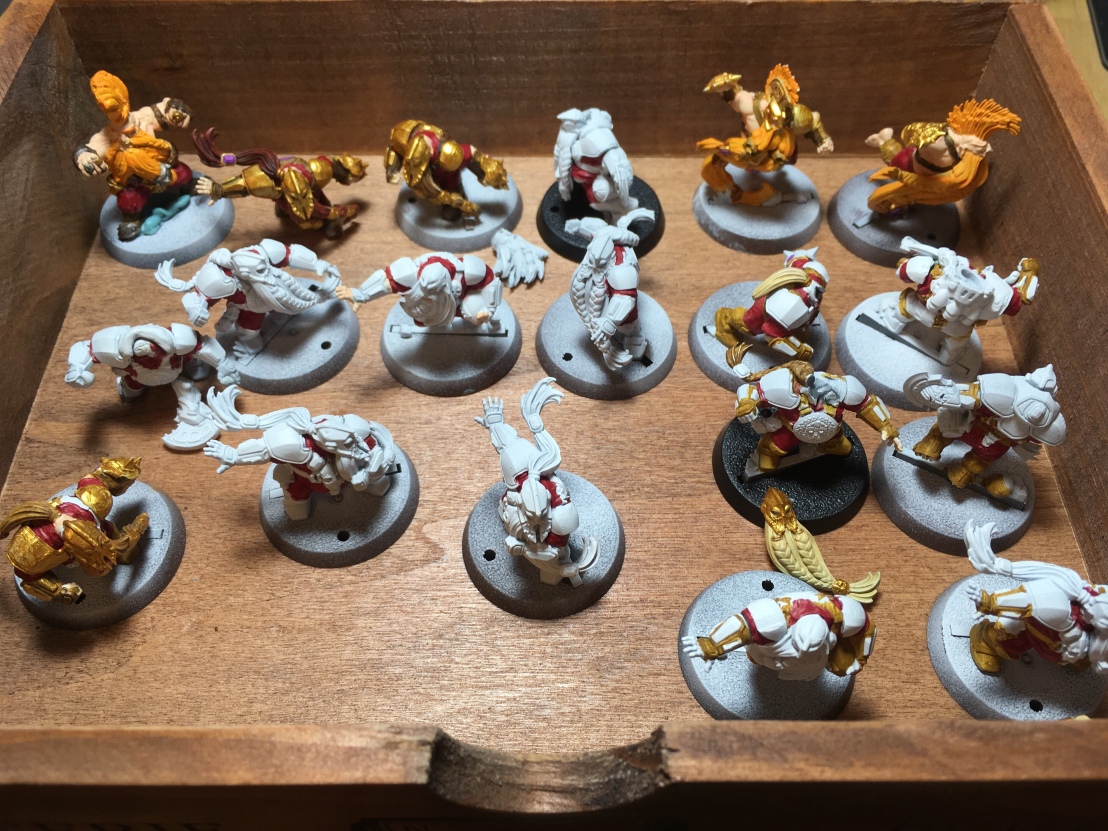 Don’t look like too much, but I know how many hours I’ve put in and it feels like I’m getting pretty close. So there’s that.

Now onto the Gaming haul!

I got a package today which kind of helped inspire me. I caught one of  Funagain Games’ sale. I think it might still be going on, but at any rate it was pretty much the lowest price I’ve seen in the Blood Bowl Almanac so far. Which I’ve really been on the fence about purchasing. Mainly because I have all the new rulebooks already and even have them through the app on my phone. Which I’ve found I’ve used the most. So part of me was holding out for an electronic version.

After seeing it though, I’m glad I didn’t wait. 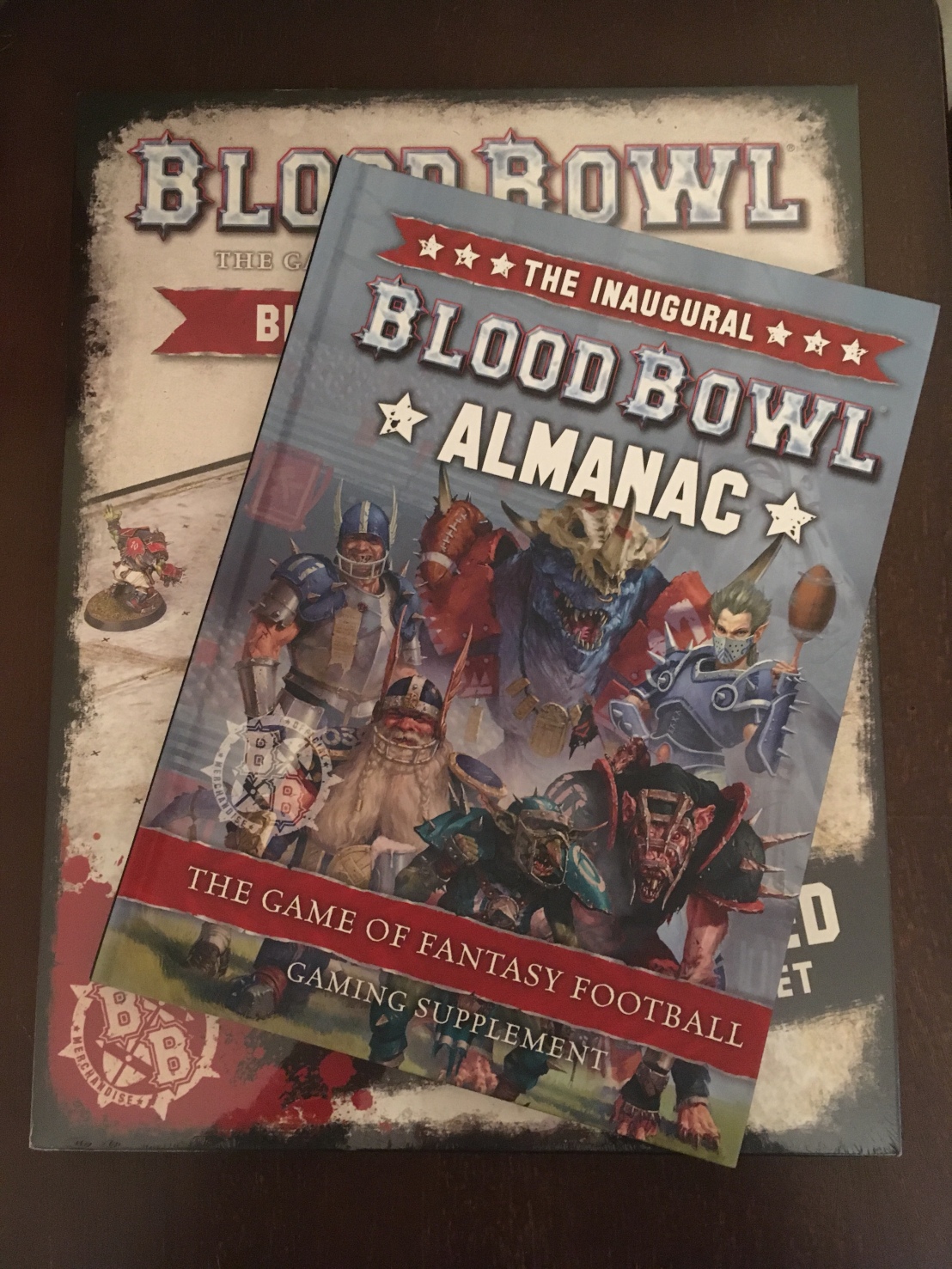 It’s a very nice hardback and the rules have been compiled and reorganized a bit. All the teams are in the front of book, which is nice for reference.

Here is my one serious complaint:

Note that list of “Official Teams”. Well, it doesn’t include Humans and Orcs?!?

Yea, you tell them Q-bert! As a reference book, it’s pretty pointless to disclude two of the most well known teams in Blood Bowl! I’m guessing it was because they are part of the basic/boxed rules, but still ridiculous.

[EDIT: while the Humans and Orcs are not listed at the front of the book with the rest of the teams, they are included in the Official Reference Guide section at the back! That’s really good enough for me, so it’s getting to be win-win on this almanac. They even include the Teams of Legend pdf material, which I figured they would want to leave out. It’s great to have all that info in one spot now.]

Ok, let’s move on to some more positives. 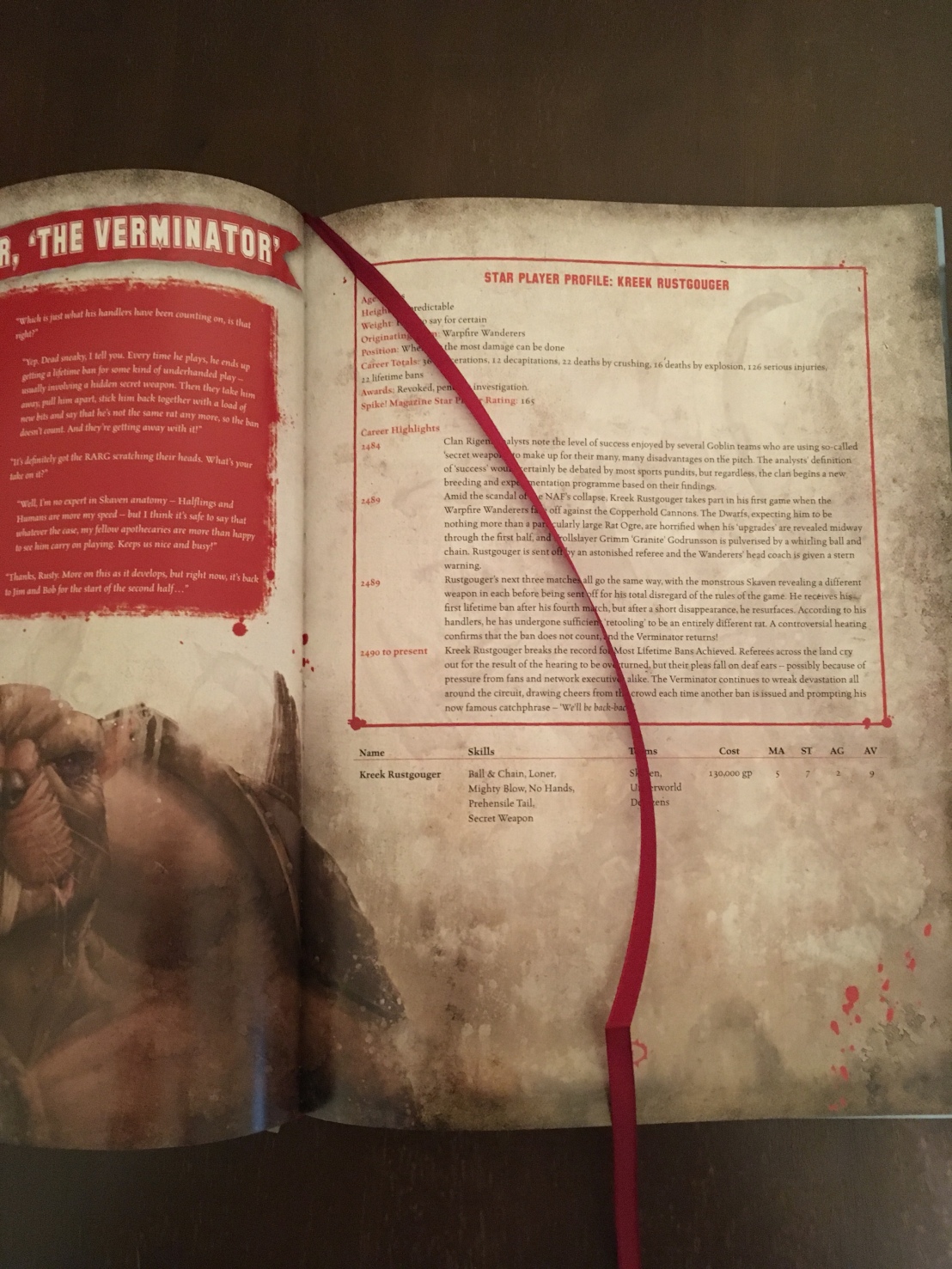 Yes, the book actually comes with a fancy bookmark. Wowzers!

And not just that, sewn binding!

This is the fanciest Blood Bowl book I’ve ever seen! Beats a lot of the RPG books I’m used to as well. I usually only see this sort of stuff on higher end Graphic novels. So yes, I’m impressed.

I haven’t read through the whole book, but it seems to have done a job of compiling rules from White Dwarf and Death Zones. Once I get around to playing some tabletop (see “finish Dwarf team blather above”), I’ll be pretty happy to have this at my side.

I’d definitely buy the next almanac as well. Though it might also be nice to have a thicker book with all the teams at some point.

And now for the next item:

I haven’t actually cracked this one open yet, just in case I decide to resell later. But this is the same “Blood on the Snow” pitch that sold out in no time on the first go round. I ended up getting one of those from Ebay later on, for probably about double the price. Well, I off-loaded it on Ebay once again, and opted for the new one. “Why?” you ask. Well. I’m crazy! There’s that, and also this one includes dugouts which the original did not. So I recouped some of my money by selling off the old, and now I’ll have dugouts too. The pitch itself, has an Orc and a Human side. Both covered in snow. The thing I really like, is all the little details they threw into it, like a Snowman, blood on the snow, etc. It’s one of my favorite pitches so far. I just wish they might have rebranded it as Norse, but that team might be a ways out.

That’s all for now. I’ve decided I’m not going to do weekly posts of miniature painting. The progress just isn’t there, and you all would have to stare at ugly slow pictures. I do plan to keep pushing myself to make progress on them though. As I feel like I’ve made some steps toward that, I’ll “reward” you with more half done ugly pictures.

I’ve also been working on some other articles, so those might go up inbetween. Till then, hope your dice stay hot and your paints stay smooth!

Waging War Upon the Universe Whenever I Have Time.

Can You Roll A Crit?

For Nerds, By Nerds

A Lifestyle Blog for Tabletop Gamers and Hobbyists

Because booze can't cure everything...

Urgent undertakings and hordes of hobby

Recording adventures in miniature painting by an semi-talented painter whose skills are not as good as he would like them to be...

Painting In The Dark